Universally Inclusive: Takeaways from the YP Summit in Brazil

Carmen Vigil, NWCUA Director of Cooperative Momentum, traveled to Curitiba, Brazil with a delegation from the World Council Young Credit Union Professionals (WYCUP) Program and organized by the World Council of Credit Unions (WOCCU) Global Classroom Program. She shares highlights and takeaways from her experience abroad, in her article, "Learning New Ways From the Brazilian Credit Union System to Grow Our Movement Here at Home" 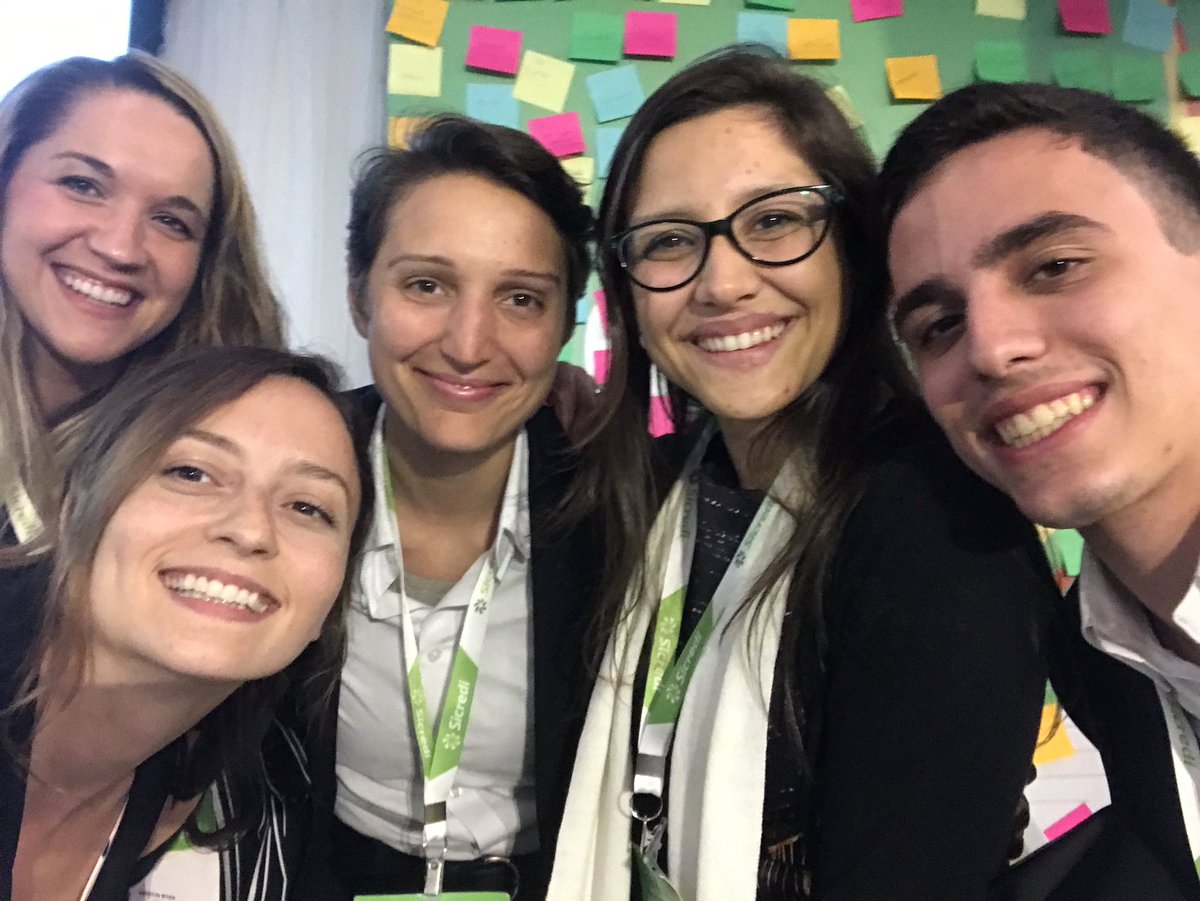 Last month I had the opportunity to participate in a Young Professionals Exchange program as part of the World Council’s Global Classroom program. The trip was organized around the Sicredi Credit Union system’s second annual Youth Summit, a gathering of young leaders from across Brazil. Our delegation included representatives from the United States, as well as young credit union leaders from Costa Rica, Colombia, and Chile. In addition to participating in the summit, we spent two days touring local credit unions that are part of the collaborative Sicredi system.

The trip gave us the opportunity to learn not just the nuts and bolts of the Sicredi structure, but to experience firsthand how Brazil’s credit unions show up in the communities they serve.

Though optimistic, landing in a new country and a city I had previously never heard of, I wasn’t quite sure what to expect. Would credit union staff be welcoming? Would it feel awkward not to speak their language or understand their signage? Naturally excited and admittedly a bit nervous, I chatted with the other members of my delegation, catching up on our travel mishaps and triumphs – several of us had been rerouted, delayed, or rebooked, leading to wide but tired eyes as we headed into Day 1 of the Sicredi Youth Summit – an international gathering of young leaders.

We arrived at the Sicredi Central Office and were immediately greeted by over a dozen staff members and large-scale signs displaying the Portuguese words, “Tudo que somos; tudo que podemos ser.” Though intrigued and fascinated, I had no clue about the meaning of the words plastered around us. We were ushered into a large meeting space and handed headphones to hear our interpreters. The stage was lined with large Lego-style blocks, promoting a kind of playful and creative energy that immediately felt unique and fun. 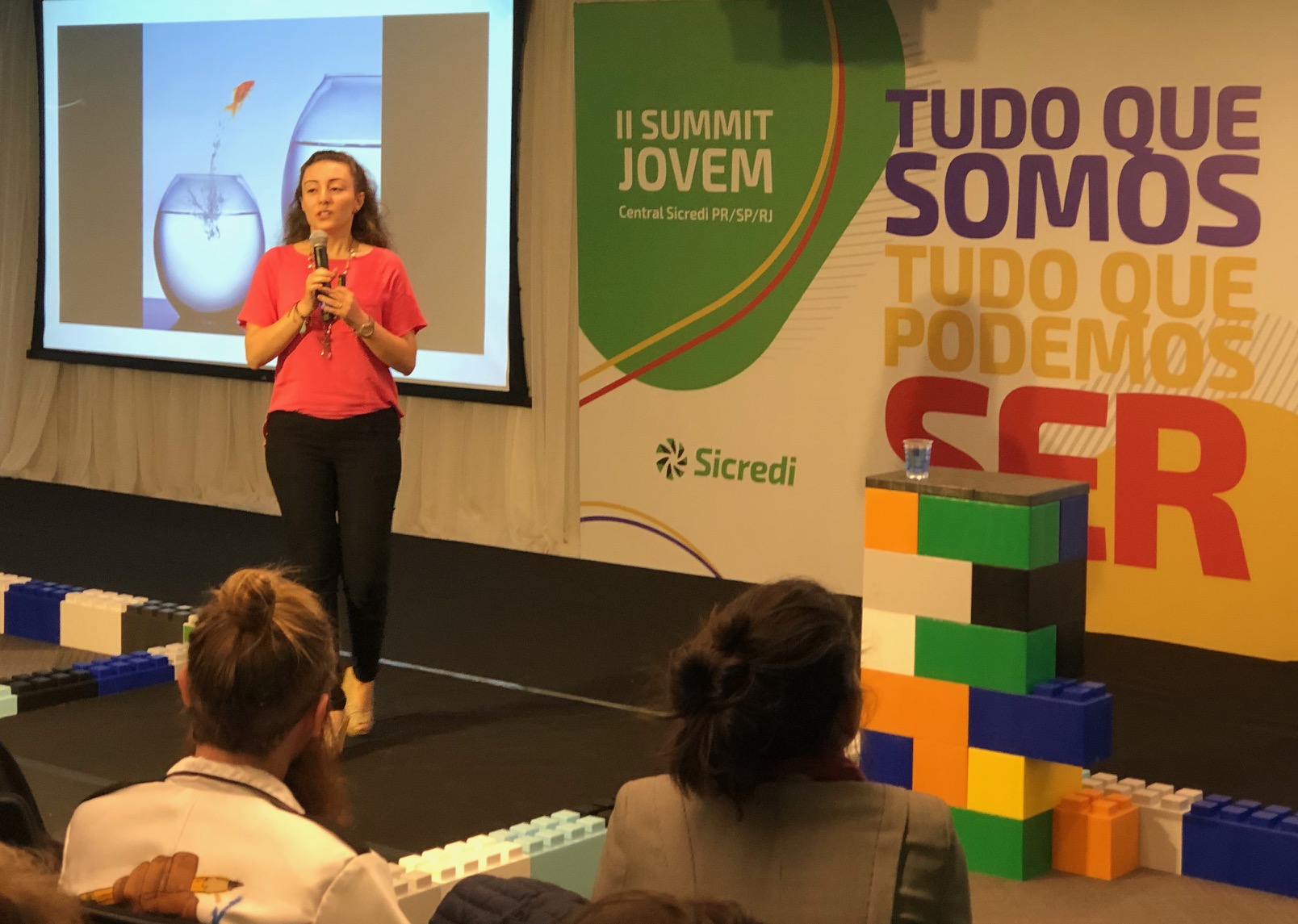 As the summit kicked off, a variety of hosts took the stage, walking us through the agenda and delivering a kind of high-pitched energy that made me feel like we were contestants on a game show. Again, the words, Tudo que somos; tudo que podemos ser. Our translation began and we finally learned the meaning: All we are; all we can be – a nod to Shakespeare. Our hosts explained that Shakespeare’s poetry is a universal language that transcends barriers. We can all find meaning and understanding through the famous, insightful lines of his plays. Ten minutes in, and every concern or anxiety I had felt washed away. I know Shakespeare, so I was included. We were all included through the tool of shared meaning, and it didn’t matter which language we spoke or where we were from.

The Youth Summit continued to build on the timely and relevant theme of diversity and inclusion throughout the next two days. Attendees included representatives from Angola, Argentina, Canada, Chile, Colombia, the United States and Brazil, and translation was offered in English, Spanish and Sign language. Presenters from all walks of life took the stage, sharing stories about how they found meaning, purpose and (importantly) action through various projects. Steven Stapp, President & CEO of Unitus Community Credit Union and Chair of the World Council Board, gave a presentation about global credit union initiatives. Steven recalled a past visit to Brazil’s famous Iguazu Falls and urged the attendees to not just view such sights, but to step into them, to lean into the Credit Union Movement. Water – another universal symbol that was naturally understood by us all despite our surface differences. 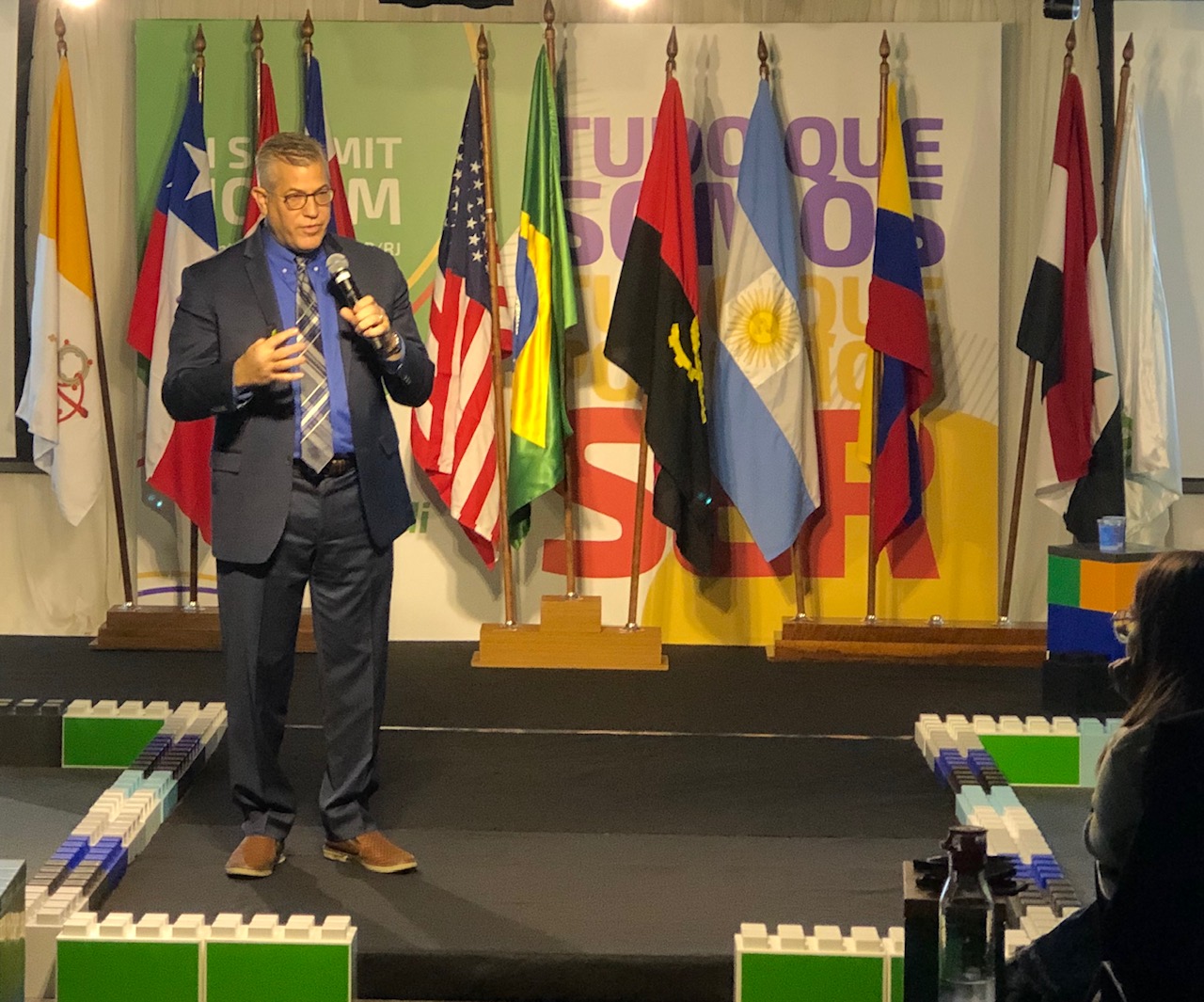 The Sicredi Credit Union system of Brazil is highly collaborative, with five central offices aiding the success of individual shops that serve distinct fields of membership. Branding, marketing, product development, and other operational decisions are handled by the central offices, leaving individual credit unions with the capacity to focus on the unique needs of their members. Credit union members are invited to participate and get involved by joining various Sicredi commissions, including one focused on young people and another on women. In fact, credit union members were present at the Youth Summit, a testament not only to the commitment of Sicredi to engage young people, but a reflection of their members’ investment in the cooperative system.

After the Sicredi Youth Summit, our delegation traveled to another region of the Parana state in Brazil to visit Sicredi-Campos Gerais – a local credit union headquarters. We toured the operational spaces, including the membership opening queue and loan processing departments. We were greeted by the credit union CEO & President Popke Ferdinand van der Vinne and Executive Director Marcio Zwierewicz. Van der Vinne shared a presentation detailing Sicredi-Camps Gerais’s impressive growth, including adding 1,000 new members per month. With 67,000 members, that equates to nearly 20% membership growth per year!

Van der Vinne emphasized that the biggest challenge stemming from that impressive growth is training new employees to keep up with the demand. Beyond the basic tasks, helping new staff understand the cooperative culture is the most important part of what sets them apart from other financial providers. Credit unions are a business of people; banks are a business of capital.

Sometimes we must step outside of what we know to see not only what we are, but what we can be. Experiencing the collaborative power of the Sicredi Credit Union system in Brazil provided myself and my fellow delegation members a small but revealing window into new possibilities that we wouldn’t have otherwise seen. There are opportunities to grow our Movement that we haven’t yet considered, and they start with building an inclusive framework for potential members and staff alike. 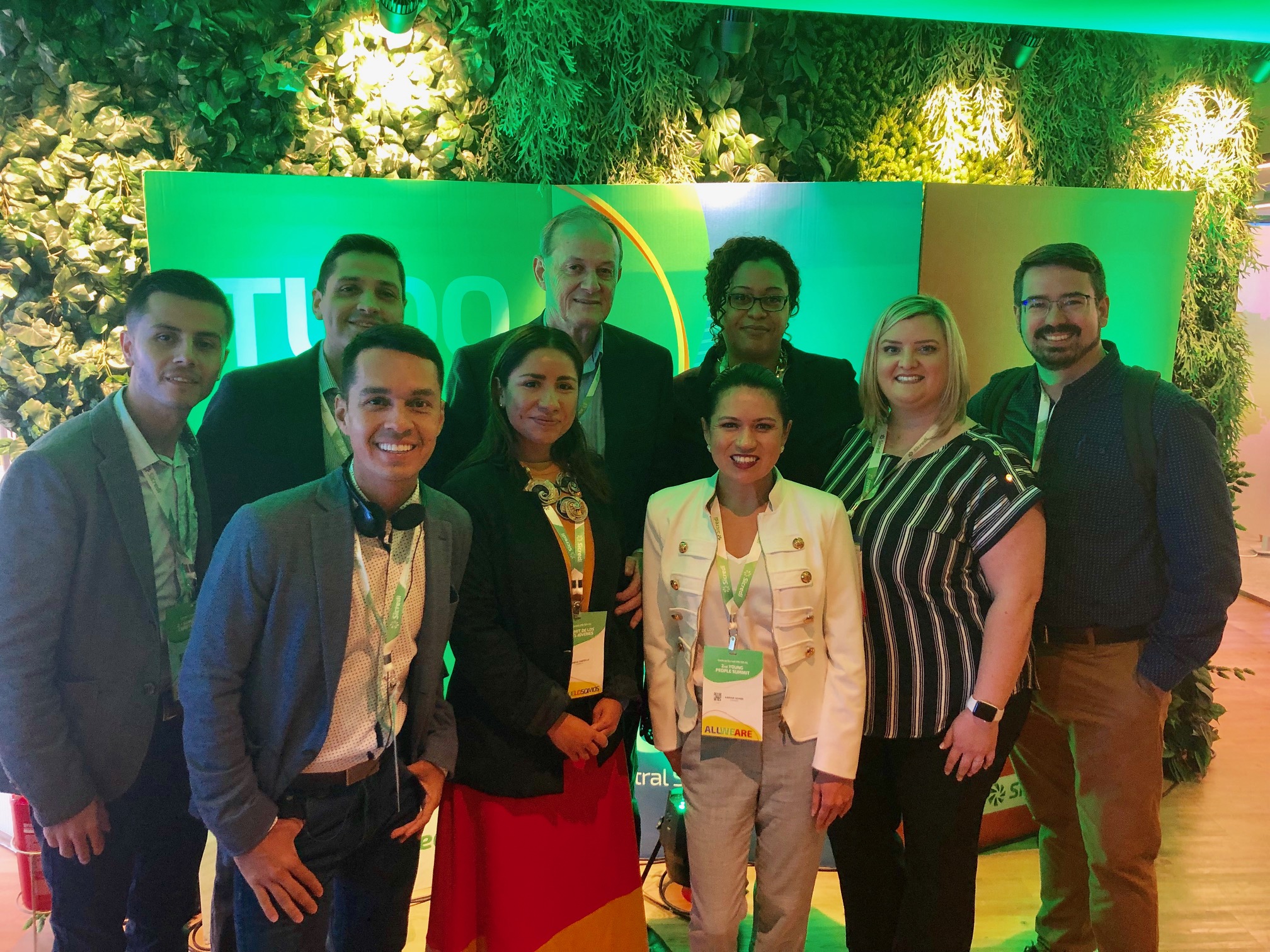 In the words of Sicredi President Manfred Dasenbrock, “If we include everyone, we won’t have discrimination or barriers. If we organize for everyone, we don’t leave anyone out.” By inviting all voices and perspectives to the table and finding ways to effectively collaborate, we can create something even more cooperative, expansive, and impactful for the communities we serve.

The World Young Credit Union Professionals (WYCUP) program is an initiative under the Worldwide Foundation for Credit Unions, the charitable and cooperative engagement arm of the World Council of Credit Unions. WYCUP was initially designed as a scholarship program to promote and engage the next generation of credit union leaders in the international credit union movement. Today, WYCUP has become a platform for young credit union professionals, including current recipients, alumni and past scholarship nominees, worldwide to connect, share and live the credit union values of cooperation and people helping people.